ScapeUp Spain: A promising ecosystem, but more capital is needed 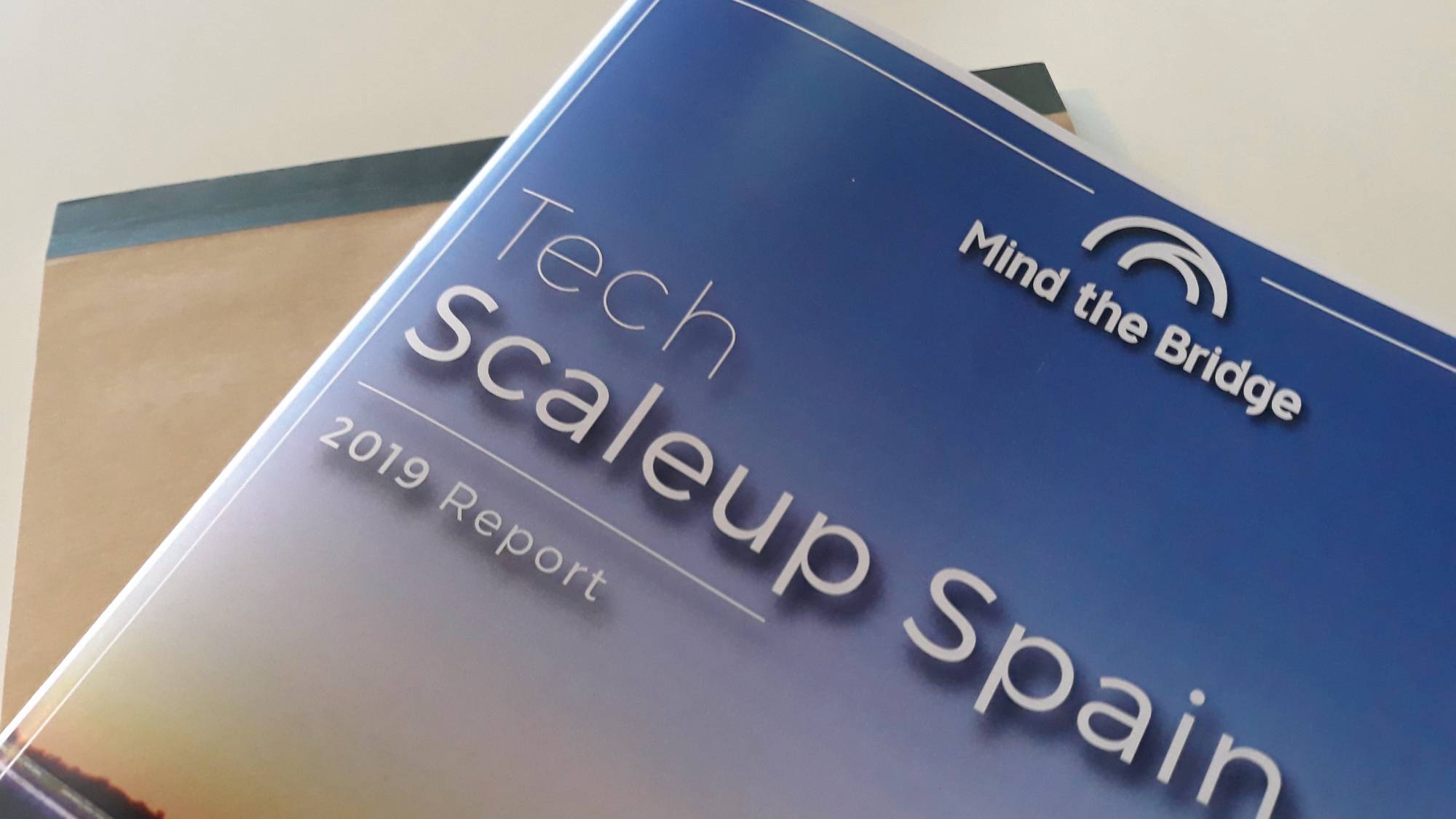 The Spanish scaleup ecosystem in 2018 still ranks 5th in Europe in terms of the number of scaleups (317 in total), and 6th in the capital raised ($4B in total). Though, investing $800M per year, it remains quite far from the top countries in terms of capital invested (Germany, France, and The Netherlands pour around $4B, and Switzerland over $2B). However the Spanish ecosystem is still the most performing among the Southern European countries.

“On the bright side, the performance in terms of the number of new scaleups is promising: Spain added 61 new scaleups in 2018, a growth pace that is comparable to Switzerland, The Netherlands, and Sweden - commented Alberto Onetti, Chairman of Mind the Bridge - And we expect the numbers to grow in 2019 by a further 25-30%. Then the Spanish startup ecosystem is vital. But it needs to be supported with more capital.”

In a wider perspective, Spain hosts 4.5% of the total number of European scaleups, which attracted approximately 3% of the overall capital injected into the European tech scaleup ecosystem. This is quite a half of the entire Southern Europe area,  once again dragging its feet in the innovation wave with 10% of scaleups (691) and 6% of capital raised ($7.1B) regardless of their 20%+ share in Europe’s GDP ($4,877B vs $22,752B) and 22% of population (131M vs 593M). Central States, for example, contribute to 27% of scaleups and 30% of investments, Nordics with 16% and 19%, respectively (despite a relative small size), while British Isles outpaces the rest of Europe with 35% of scaleups and capital raised. 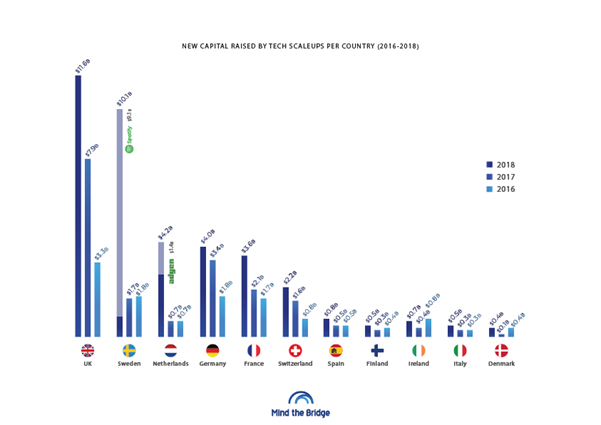 As shown also in the Scaleup Europe Matrix* - aimed at measuring the innovation economy in comparison to the size of the overall economy - Spain, together with all the other Southern European countries, is positioned in the lower left sector which includes those countries that underperform the European average. However, compared to last year, the country increased its density ratio by 0.2 points, from 0.5 to 0.7 scaleups every 100K people. As a consequence, its position moved up, which reflects a consistent, relative increase in the number of scaleups in Spain. Then we can project for Spain a future evolution trajectory towards the center of the Matrix. How much time this process would take would mostly depend on the amount of venture capital poured into the ecosystem. 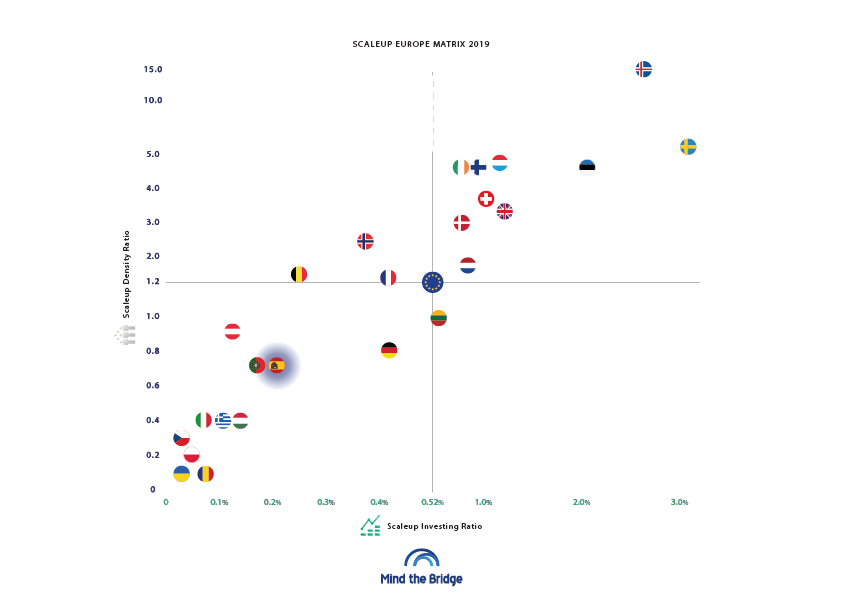 In addition, the scaleup ecosystem in Spain appears to be of more recent foundation compared to other European countries: 76% of Spanish scaleups were in fact created after 2010 (substantially aligned with the European value of 74%) and 32% between 2014 and 2018.

Almost 70% completed a funding round in the 2015-2018 period, 2015 representing a first inflection point in terms of scaleup financing and 2018 showing a further acceleration, that confirms that it might accelerate again in the upcoming years.

“Spain, as well as most of the Southern and Eastern countries, suffers a chronic situation of relative undercapitalization compared to the other European regions. Unfortunately, there is only medicine to treat such disease: pour more capital. Move the investment bar from hundreds of millions to billions.” - pointed out Arantza Ezpeleta Puras, General Manager of Technology and Innovation at ACCIONA.

Focusing on tech scaleups, Mind the Bridge research shows that 32% ($1.1B) of all VC investments poured into Spanish scaleups comes from domestic investors (4% higher than the European average). 17% comes from other European investors (7% of which from UK, equal to $0.2B), 60% comes outside Europe (32% from US, 10% from Japan and 9% from the Rest of the world).

Spain hosts a total of 33 (10.4% of the total) dual companies - scaleups that, shortly after inception, move their HQs abroad, while keeping relevant operations in their country of origin  - that cumulatively secured over $0.8B (20% of the total capital raised). They raised more than double the capital raised by scaleups that pursued a local funding strategy ($24.6M on average versus $11.2M). 23 out of 33 choose the US as their destination - 14 of them (61%) opted for Silicon Valley, with a preference for San Francisco (6) - while 3 went to London.

If we look at the industries, the Spanish scaleup scene appears to be dominated by more “traditional” tech industries: 14% (45 in total) provide E-Commerce services and products, Fintech follows with 10% (32) and, consistently with the centrality of the tourism industry in Spain and the presence of incumbents such as Amadeus, Traveltech ranks 3rd with 8% (25). 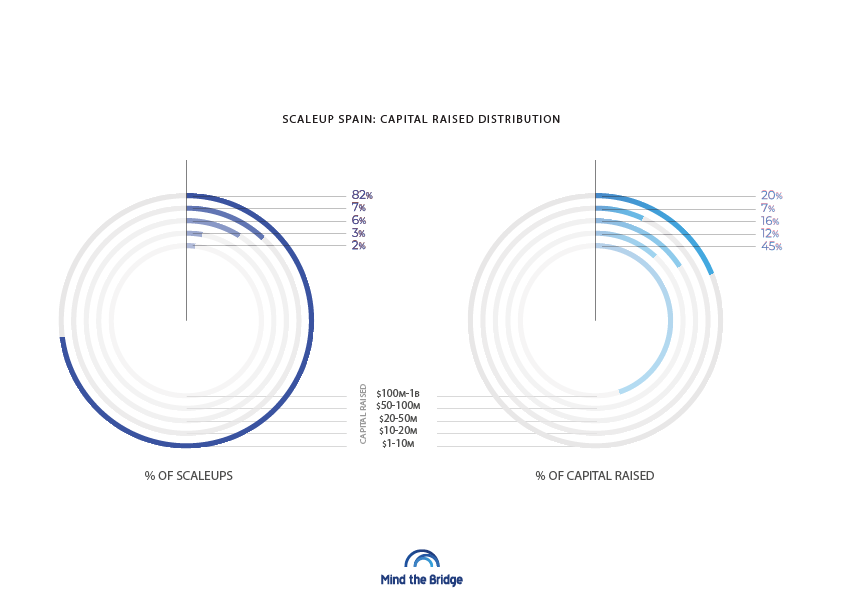 *Methodology (for a complete list, please see the full Report)

About Mind the Bridge

Mind the Bridge is a global organization that provides innovation advisory services for corporates and startups. With HQs in San Francisco (CA) and offices in London, Milan, Cagliari, Barcelona, Brussels and Berlin, Mind the Bridge has been working as an international bridge at the intersection between Startups and Corporates since 2007.

Mind the Bridge scouts, filters and works with 5,000+ startups a year supporting global corporations in their innovation quest by driving open innovation initiatives that translate into curated deals with startups (namely PoCs, licensing, investments, and/or acquisitions).

Mind the Bridge publishes curated reports on the status of the scaleup ecosystems in different geographies, as well as M&As, IPOs, and innovation market trends in various verticals.

Mind the Bridge has strong partnerships with entities such as the London Stock Exchange and the European Commission, for whom it runs the Startup Europe Partnership (SEP) open innovation platform.

ACCIONA is a global group that develops and manages sustainable infrastructure solutions, especially in renewable energy. It business spans the entire value chain, from design and construction through to operation and maintenance. ACCIONA’s goal is to lead the transition towards a low-carbon economy, bringing technical excellence and innovation to all of its projects to design a better planet. With a presence in more than 65 countries and sales of €7.510 billion in 2018, the company is committed to contributing to the economic and social development of the communities in which it operates. www.acciona.com.